Where did you get the inspiration behind the all red theme?

I’ve always been very much inspired by photographers that deal with stark colour blocking such as David Lachapelle and Miles Aldridge. I feel like until I had a studio of my own it was hard to create a colour blocked set – given the controlled space required. But being in a studio of my own this summer, this was one of the first things I wanted to explore. I decided to pick one colour instead of a number of them and really focus on all the things that I could do with that colour – dig deep if you will. I did some research on colour theory and ended up choosing red. I like the air of immediacy that It gives off and the fact that the colour, in itself, demands attention. I’m quite content that I gave myself this challenge for my debut solo show. It gave me a unique opportunity to really flex my creative muscles and build a lot onto a rather simple base concept. This proved to be fruitful as it just forced me to integrate a lot of references, great clothing, and props into the shoot that very much bring things to the next level (in my opinion).

Why did you choose to feature boutique brands in your show?

I have a lot of friends that are local designers. Working in a city like Toronto I think its important for creatives to help each other out. I take every opportunity that I can to champion the artist and believe that we have so many great designers to offer that it would be a shame if I didn’t showcase at least a few of them. When I was self producing a shoot with with many models, I immediately thought of sourcing the pieces from local designers.

The rest of the cast and crew were already all Toronto based and it was a great chance to show off what a creatively bad ass city I have the pleasure of living in. I knew several of the designers and hit up others on instagram. I was overwhelmed with the amount of support I got from these lovely ladies and gentlemen. One of the benefits of working with boutique local brands is that you almost always get an opportunity to interact with the designer themselves and discuss the project, even for just a minute. Often you’ll have them offer to help even further – such as Marie Copps, A Designer/ Milliner who created a number of neck/head pieces we used in the shoot, who stayed for over 8 hours of shooting to assure that her pieces were styled correctly since she deemed some of them difficult to deal with on set. Keep in mind that we already had a stylist on set. It is this kind of dedication to the craft that makes working with local artisans so rewarding. Another example – Masha Apparel – a mom-preneur. She has a very busy schedule between her kids and her business, but still made the time to drive her minivan over to my studio and drop a ton of awesome pieces off at a super last minute request. I could tell stories about all the designers I worked with, but ultimately working with boutique brands is a great experience, especially for photographers and creatives. Creating those relationships is crucial and often you develop mutually beneficial relationships like I have with untitled & co and a number of other labels where you shoot for them and they supply you with clothes. A win win. 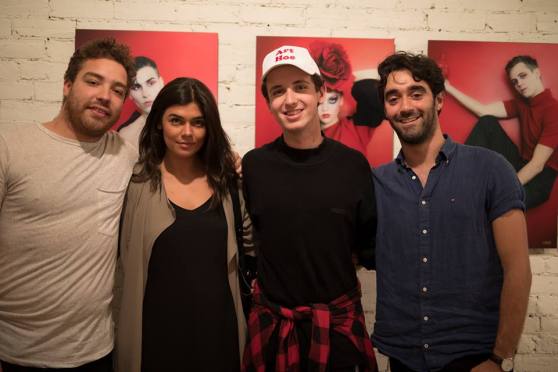 What was the biggest challenge/obstacle and how did you overcome it?

I came into this process with a lot of confidence. I had decided to self produce the endeavour. An interesting choice given the fact that most art shows or similar ventures are collaborations with a gallery. Now I could have done this, I have an Instagram following and a body of work, however I wanted to do this for at least a week and had an insanely busy summer. Essentially my only option was to plan the entire event in a month and a half. And, since that was way too small a time frame for me to court a gallery, I decided to take on the beast myself. This whole venture was a challenge in itself; from finding an investor, to finding a space and haggling down the price with promise of promoting them to my audience, to hanging the work in the space and physically cleaning the windows, to being there 12 hours a day every single day. The project as a whole was extremely demanding. Hundreds of hours of often very tedious work – but all to an end that was something I very much wanted to achieve. So I put in the leg work. Ultimately the most difficult part of the process was probably PR. I’ve helped publicize other events, tons of them actually, but it becomes a lot harder when it’s you cold emailing hundreds of magazines, newspapers, and blogs about getting any kind of coverage – all for yourself. Lucky for me – my hours of emailing paid off, but it was definitely not what I thought I’d have to do just to get press coverage. I think that these kinds of “behind the scenes” things aren’t talked about very often because they ‘aren’t glamorous.’ And to the people who say that? You’re right! You are! It isn’t glamorous – it’s hard work and ultimately that’s the way you get things done. I’m a big supporter of creating my own opportunities and not waiting for them to come to me – so this was ultimately simply another hurdle I needed to get over to realize my goal.

What was your favourite part about photographing this shoot?

I had an awesome cast on this set. I hand picked all of the models myself – most of them being friends of mine – many of whom I wanted to shoot with for quite some time. It’s a great opportunity when I get to shoot with this many models in one place all on the same day. Especially when it’s for a personal project – so I’m very much grateful to my friends and collaborators for being so generous with their time and energy, and for being so lovely to work with on this shoot. I love producing my own shoots in my home studio because it’s a very collaborative vibe on set. I assemble a team of people who I want to work with and we work together to create some art. It’s a lot of fun! I really loved getting to take advantage of my home studio as well. it was suited perfectly for a shoot like this and I’m so happy that I got a chance to put my red accent wall to good use! So ultimately it’d be hard to put a finger on just one favourite part, but it would definitely have to do with the general vibe on set and getting to work with my friends on home turf on a project I’m passionate about.

Is there a specific personal message you wanted to get across/communicate to your audience with your work?

I generally think that the world is a pretty horrible place. It’s sad but true. I think of myself as a realist. However, Within the world of my art, I like to create things that people have never seen before – heightened, surreal images. Escapism if you will. Some people find them beautiful, others find them haunting. But ultimately I like to create work that aesthetically distances the audience from the piece. Even when people look at something as realistic as a photograph, such as in this series, I want them to realize that this is a stylized interpretation and derive meaning and pick up on references within. Some of the works involved referenced drag culture, others the corruption of innocence in relation to sex and drugs. The list goes on. I like incorporating subtle references into my work because I believe it is par of the process of experiencing a work to think and make informed judgements based upon your own experiences. I like incorporating a number of subtle counterculture references and combine them into one very commercial image. Ultimately I want to create a surreal world of excess and beauty in a lot of my work and I think that this is especially evident in this photographic series.